Drones Are the Only Practical Solution to Food Delivery 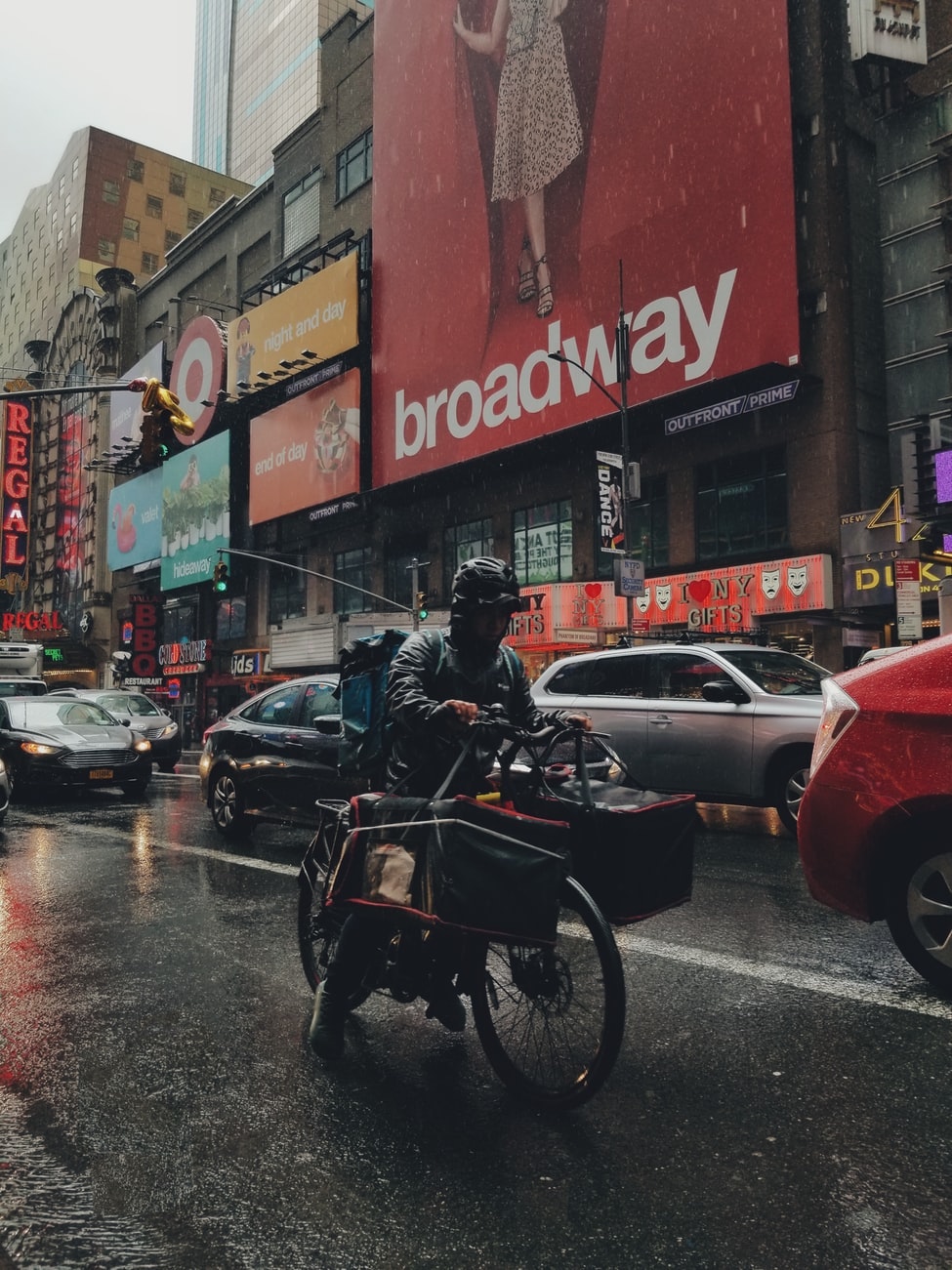 At the forefront of all of this, food delivery is beginning to implode. Rumors circulated the first week of January that Grubhub is considering a sale. While met with an ambivalent response from the company, this has shined a spotlight on the food delivery space. On closer inspection, Grubhub’s floundering isn’t an isolated issue. Postmates, Doordash, and Instacart have long operated with poor unit economics. It all brings to light the simple — but previously disregarded — reality that underlying fundamentals have to consistently improve to create a long-term sustainable business.

The Quandary of the last mile

The crux of these delivery businesses is ultimately within their logistics. It’s common knowledge that last-mile delivery is both the most expensive and time-consuming segment of the supply chain. In fact, the last-mile leg comprises 53% of the total costs of the average shipment. Carriers simply tolerated this cost for decades as volumes were low enough that they did not exacerbate the problem. It’s only since the rise of e-commerce, driven chiefly by Amazon, that the inefficient nature of last-mile delivery has come into focus. Amazon went public in 1997. Subsequently, there has been an 18,233% increase in digital sales. Consumer applications and the buying behaviors they’ve enabled have far outstripped the ability of our supply chains to handle them. The growth of e-commerce has led to a 33% increase in B2B last-mile delivery demand in the last two years, and a 67% lift for B2C businesses over the same time period. Amazon, front and center, had the foresight to see this coming and steadily established a moat for itself by vertically integrating its own supply chain — starting with the launch of Fulfillment by Amazon in 2006. Now, Amazon's last-mile network handles 3.5B deliveries per year. As a result of the Amazon Effect, all US businesses today that rely on physical delivery to reach their end users are fighting an uphill battle.

Some companies have made creative modifications to their business models to insulate themselves from the Amazon Effect, such as leaning into differentiated on-site experiences. On the other hand, hot startups in the DTC and on-demand delivery space have been using discounted pricing to gain users and drive usage. This can be an effective tool when used tactfully as part of a larger plan, but it loses its value when everyone in the space is running the same play in a war of attrition. As previously stated, if unit economics don’t consistently improve, eventually businesses will collapse in on themselves.

This takes us to how companies have thought about last-mile logistics thus far and how they sensibly minimize costs where they can. When it comes to last-mile delivery, there are four key levers: density, volume, mode alignment, and batching. Time- and cost-effective conveyance of goods requires thoughtful pushing and pulling of these levers to fit the product being transported:

In the case of food delivery, the cost of a delivery person — depending on market — is in the neighborhood of $8/delivery. At this point, everyone in the space should know that this can’t be done at scale. The fact of the matter is that food delivery possesses fragmented, local network effects — meaning that transactions occurring in these networks exist within specific cities, not across them, so winner-take-all dynamics are constrained regionally. Improvements in density, volume, batching, and mode alignment have helped shield food delivery companies from some of the cost. Nonetheless, after over a decade in operation, long-term sustainability is still yet to be found.

For a moment, imagine you are a US citizen of the early 1900s. A visit from the milkman was a regular weekly occurrence. Following the standard delivery model, the milkman would run a stable route starting at the dairy in the morning that was continuously optimized as new deliveries were added. The more houses along his route, the lower the cost per delivery. However, the model falls apart when any variance is introduced. For example, if someone requests a different delivery time or wants to order something different. This is precisely where the problem with modern food delivery lies.

In its current state, food delivery logistics are set up as a point-to-point system. A delivery person is idling around their neighborhood; they receive a ticket to pick up an order at Chipotle; they must go first to the restaurant to receive the food; they then drop it off at the recipient's location; repeat. Routes are highly variable.

Batching, the strategic assignment of many deliveries to one driver, has been a key tool in helping to eliminate some of this variability. The benefits of batching are quite simple. It allows the delivery driver to make multiple deliveries along the same route. The more orders delivered in each run, the lower the cost per order, making it much more like the milk run. Increase density of the marketplace and this effect becomes magnified further. With this said, all the major food delivery companies today fully understand and leverage these effects but still have yet to compensate for the cost of delivery drivers.

Drones solve this issue. Really, whichever method removes the human delivery driver from the equation solves the issue, but drones make the most sense for several reasons.

One, drones enable a fundamental shift in the business model of food delivery. Instead of running a point-to-point logistics system relying on idle drivers, a restaurant could own its own logistics and operate as a hub-and-spoke system. What does this mean? The short answer is that this allows for sub-5-minute deliveries that cost less than $1. By placing the means of delivery in the hands of a restaurant, drones would fly back and forth from the restaurant as a hub, eliminating the bit of the journey not directly between the restaurant and the customer. Additionally, drones can travel as the crow flies, further increasing delivery speeds and taking advantage of underutilized airspace (where sidewalk robots falter). This means shorter wait times and preservation of food temperature and quality, which leads me to the second point.

Brand and reputation around cleanliness are paramount in the restaurant business and we see this as being a critical point of leverage. We’ve previously written on supply chain advantages serving as a catalyst for differentiated customer experiences. Here, drone-based delivery reduces food degradation and improves the customer experience. We already know that almost 30% of food delivery drivers are eating your food. Drones don’t get hungry or suffer from poor etiquette.

Lastly, and arguably most importantly, the environmental benefits drones offer. There is generally a strong positive correlation between the size of the delivery vehicle and its fuel efficiency. Consider that the cost of fueling an e-scooter to ride 5 miles is a little more than 1% the cost of fueling a 28 MPG car. In other words, the same amount of energy required to drive a car one mile can drive a scooter more than 80. Furthermore, the early research conducted on the climate impact of small delivery drones seems to display a similar trend.

The slope of enlightenment

For most of the 2010s drones remained in the trough of disillusionment. Similar to where blockchain technology and autonomous vehicles stand now, the first wave of excitement came and fizzled out. Investment in the area has steadily grown by more than 2000% percent since 2012, and despite a dip from 2017 into early 2018, sentiment is bouncing back. Investors are starting to see a level of maturity in the market, largely driven forward by progress on the regulatory front, that has given the space a second wind.

There are some key differences between the state of drones then and drones today. Then, the technology was obviously earlier in development, and at that point, investment was still primarily funneled into R&D heavy projects. We’re now reaching a point where hardware and software investments have come of age and regulators have opened their eyes to the advantages of taking a progressive approach. This will tip the scales from spurring innovation on the hardware side to the business model side as new market opportunities open up. Providing the fuel for these new business models, complementary technologies and opportunities have finally propped up that serve to fit well with drones. As evidenced above, food-delivery is the low-hanging fruit, but it's clear that the modernization of supply chains, the proliferation of mobile technology, and emerging opportunities like ghost kitchens are driving new possibilities for drones throughout the economy.

Still, startups will have to tread carefully around regulation. Regulation has been and likely still is the largest risk poised to drone-based business. Historically, investment in the sector has slumped due to a lack of clarity from regulators both in the US and abroad. Much of the regulation is derived from the aviation sector where the tolerance of accidents is exceptionally low. Consider the number of accidents within aviation versus road transportation. In aviation, the number of incidents last year was 113, totaling 1,040 deaths. Whereas, more than 3,000 people die every single day in automotive accidents. With this said, in recent months the FAA has taken an accelerated stance towards making services like package delivery and other beyond-line-of-sight operations that fly over people a commercial reality. In response to this traction, capital seems to be flowing back into the space — investment in the sector is up 12.3% on the year.

Food delivery is expected to keep growing by 5.1% annually over the next five years. In combination with the continued growth of e-commerce, the problems regarding last-mile delivery aren’t going anywhere. While drones certainly aren’t the solution to all of last mile’s problems, the value that they bring as a tool in the broader set of technologies solving these problems is undeniable. Particularly, food delivery represents an opportunity for drones to come in and save the existing players from crashing and burning. In fact, in order for the industry to survive and keep growing at anywhere near its current rate, the widespread adoption of drones in the sector is inevitable. Amid the fallout from the recent flight to quality, look to startups striking right at the heart of these unsustainable business models and strategies for the next wave of successes.

The new decade brought with it a frantic flight to quality. Investors are now less tolerant of unproven business models, reliance on VC-fueled customer acquisition, and weak unit economics. After throwing WeWork in the pillory, investors’ profitability witch hunt continued elsewhere in search of others. What began as an ostensibly SoftBank-isolated affair has now cropped up all over startupland, with layoff announcements at Lime, 23andMe, Quora, Atrium, and more.